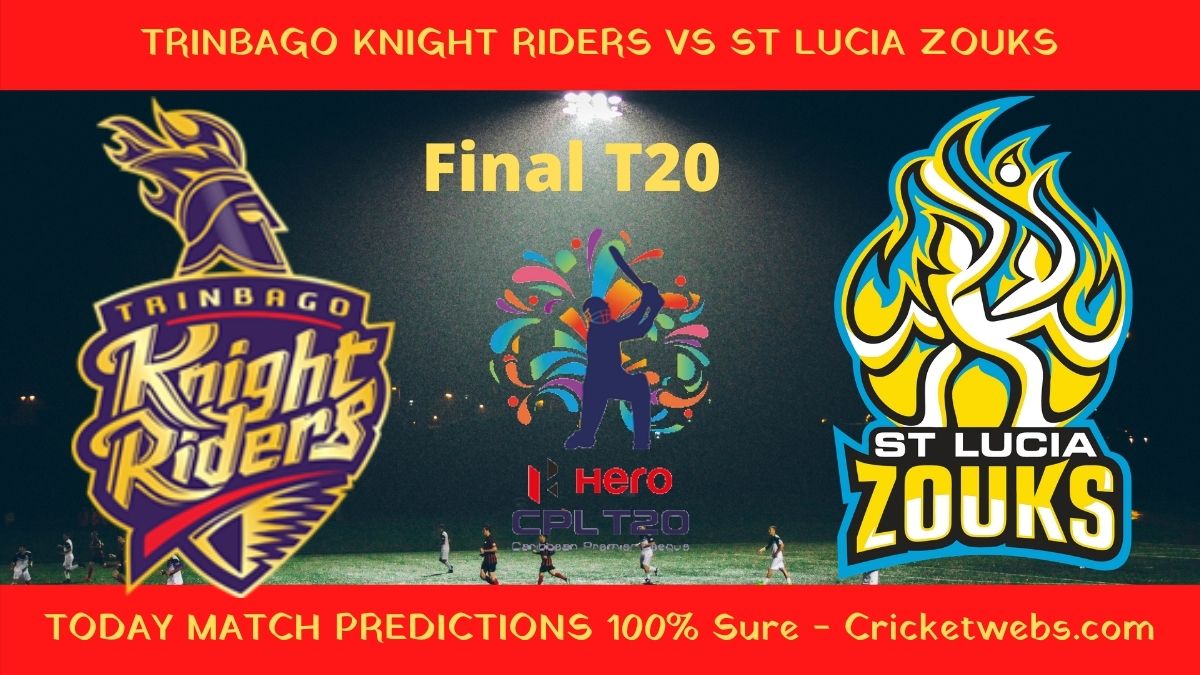 The Final T20 TKR vs STZ match of Caribbean Premier League, 2020 is scheduled to be held on Thursday, 10th September 2020 at Brian Lara Cricket Academy, Tarouba.

Trinbago Knight Riders won 10 out of 10 under Kieron Pollard’s captaincy in a league match. While St Lucia Zouks won 6 out of 10 matches under the captaincy of Darren Sammy in the league match.

Trinbago Knight Riders competed with Jamaica Tallawahs in the semi-final. Trinbago beat Jamaica by 6 wickets with their strong performance. After winning the toss, Kieron Pollard decided to bowl. Proving that, the spinners stopped the Jamaican team for just 108 runs in 20 overs. None of the Jamaican batsmen played openly. Everyone expected Andre Russell to play a good inning but Sunil Narine got out cheaply.

With good bowling, Akeal Husein took 3 wickets for just 14 runs in his 4 overs. Same as usual Sunil Narine also proved to be economical, taking the wicket of Andre Russell for 4 overs 13 runs in his spell.

From the Jamaican side, N Boner and Rovman Powell managed to bat, scoring 41 and 33 runs respectively. In the second inning, with the help of the half-century of Lendl Simmons, the target was achieved in 15 overs

Trinbago Knight Riders won 10 of their 10 matches in the league stage. Trinbago was the first team to make it to the semifinals. They Defeated Jamaica Tallawahs very easily in the semifinals and secured a place in the final.

The journey of St Lucia Zouks was not as pleasant in the Caribbean Premier League. The team’s path has been very difficult. The Bowlers of the team has played an important role in reaching the final. The St Lucia Zouks batting is not as good as the bowling. No Zouks’s batsman is in the Caribbean Premier League top 10 run-scorers list. While in the list of top five wicket-takers two Zouks’s bowlers are there.

Mohammad Nabi took 12 wickets for 222 runs in 37 overs in his 11 matches in the Caribbean League. He is a St Lucia Zouks all-rounder player. While William took 13 wickets in his 11 matches, conceding 186 runs in 31 overs, he is ranked 4th in the top wicket-takers list.

In the semifinal match, St Lucia Zouks had a match with Guyana Amazon Warriors, in which Guyana suffered a crushing defeat. Darren Sammy won the toss and decided to field first. Batting first, Guyana Amazon Warriors were reduced to just 56 runs. While Chasing the target, Zouks’s batted very fiercely. And get the target in 4.3 overs.

Trinbago Knight Riders had played a total of 92 T20 matches where they won 58 and Opposing teams won 30 matches. Their 4 T20 matches were ended without any result.

St Lucia Zouks had played a total of 77 T20 matches where they won 27 and Opposing teams won 47 matches. Their 3 T20 matches were ended without any result.

All of Trinbago Knight Riders vs St Lucia Zouks fans who are waiting for the prediction for this CPL match are now can check this match prediction with 100% sure winning like previous match. After checking the player’s previous performance and new team analysis our expert had predicted the match-winner for TKR vs STZ Caribbean Premier League match. So the Trinbago Knight Riders vs St Lucia Zouks Match Prediction 10th September 2020 from our expert’s team is here, don’t go anywhere when free is always here

Ans. Trinbago Knight Riders is our recommended winner in this match.