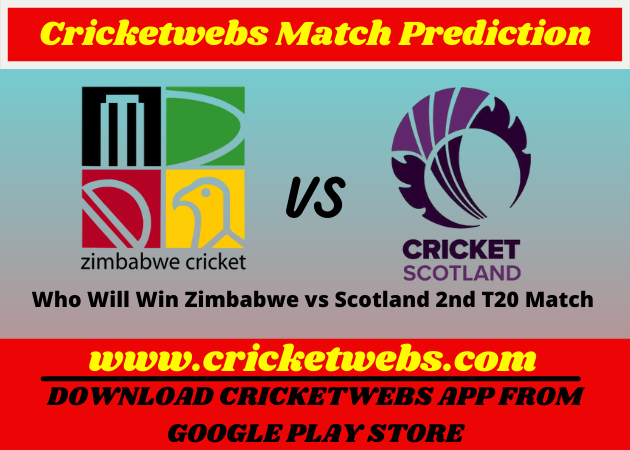 The second match of the Zimbabwe Scotland series will be played tomorrow. The first match was a resounding victory, Scotland won by seven runs in the last moments. Zimbabwe would still be wondering what happened, the match was within their grasp. Only 33 runs were needed in the last four overs, with 6 wickets remaining. But Zimbabwe remained seven runs away from the threshold of victory.

In this match, Scotland won the toss and decided to bat first. Zimbabwe bowled brilliantly in the first powerplay, with four Scottish batsmen returning to the pavilion for 30 runs. Scotland captain Kyle Coetzer could only manage two runs.

All the Scottish batsmen were struggling to score a single run. But Richie Berrington was playing his natural innings from one end. Berrington scored 82 runs in 61 balls, which included seven fours and three sixes. Apart from him, none of the batsmen could play well.

Luke Jongwe and Tendai Chatara took two wickets each for Zimbabwe. While Wellington Masakadza and Richard Ngarava got one wicket each. Scotland could only manage 141 runs in 20 overs for the loss of 6 wickets. It was not a big score according to the pitch, the target looked easy for Zimbabwe.

But both the Zimbabwe openers returned to the pavilion on the score of five runs. Wesley Madhevere was dismissed for zero on the first ball of the innings. Zimbabwe, playing a little cautiously, progressed the innings. The third wicket fell for 53 runs.

Check: Who Will Win Zimbabwe vs Scotland 2nd t20 2021 match prediction in Hindi

All the next batsmen scored runs but at a very slow pace. Captain Craig Ervine scored 26 runs in 27 balls which included two fours and a six. Sean Williams scored 28 runs in 28 balls, in which he hit two fours and a six. Milton Shumba scored at a slightly faster pace, he scored 45 runs in 30 balls.

Runs were to be scored in the last over at a run rate of only 8, with 6 wickets in hand. But in front of the superb bowling of Safyaan Sharif, not one of the Zimbabwe batsmen played well. Safyaan Sharif took four wickets for 24 runs in four overs.

Check: Who Will Win Zimbabwe vs Scotland 2nd t20 2021 match prediction in Bengali

Comparison Analysis between Zimbabwe and Scotland:

The pitch is good for batting, if the batsman does not make any mistake then it will be very easy to score runs. The spinner’s role in bowling will be very important. In the last match we saw that the ball was spinning very well, in this match also the same is being speculated. A score of 150-160 is defendable. It would be appropriate to bat first after winning the toss.

Q. Where will today’s SCO vs ZIM 2nd T20 match be played?

Ans. Today’s match will be played in Grange Cricket Club.

Ans. Zimbabwe is our recommended winner in this match.

Q. What is our toss prediction?

Ans. Scotland is our toss winner.

Disclaimer: Predictions are for entertainment purposes only. We don’t get involved in or promote betting or gambling. Also, We strongly discourage behaviors of participating in illegal activities related to cricket. Our experts try to be as correct as possible, but we do not guarantee 100% correctness.