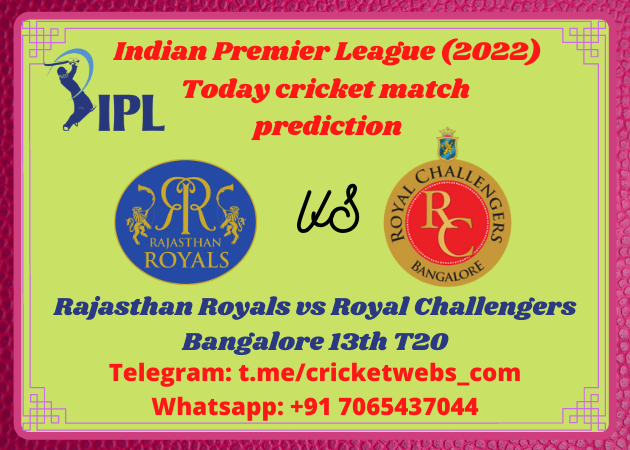 Rajasthan Royals are the only team this season who have won two matches while batting first. They defeated Sunrisers Hyderabad by a huge margin of 61 runs in the first match and Mumbai Indians by a margin of 23 runs in the second match. Both the batsmen and bowlers of the team are seen in full confidence. Batsmen like Jos Buttler, Sanju Samson, Devdutt Padikkal, and Shimron Hetmyer and bowlers like Trent Boult, Pranand Krishna, Yuzvendra Chahal, and R Ashwin are the biggest strength of this team.

Royal Challengers Bangalore also seem to be in good shape, although they had to face defeat despite scoring 205 runs in the first match. But in the second match, they all-out Kolkata Knight Riders for 128 runs and won the match. Among the batsmen, Faf du Plessis, Virat Kohli, Dinesh Karthik, and Sherfan Rutherford, and among the bowlers Wanindu Hasranga, Harshal Patel, and Mohammad Siraj are their biggest strengths.

Last match of both the teams:

Both the teams had won their last match. Royal Challengers Bangalore won by 3 wickets against Kolkata Knight Riders and Rajasthan Royals by 23 runs against Mumbai Indians. Both the teams have played a total of 25 matches against each other in IPL, out of which Royal Challengers Bangalore have won 12 matches and Rajasthan Royals have won 10 matches, while three matches were no result.

Bangalore won all the matches against Rajasthan in both the seasons in IPL 2020 and 2021. Although Rajasthan was a laggy team in the last two seasons, this season it is seen in a different style and rhythm.

Read: IPL Records That Are Almost Impossible To Break

Who will win RR vs RCB 13th T20 Toss Prediction?

Which team is the strong contender to win this match?

Royal Challengers Bangalore have the likes of Faf du Plessis, Virat Kohli, Dinesh Karthik, and Sherfan Rutherford and batsmen like Wanindu Hasaranga, Harshal Patel, and Mohammad Siraj, but the biggest challenge will be for them to stop the victory chariot of Rajasthan Royals. Although both the teams are going to play matches for the first time this season at the Wankhede Stadium.

But looking at the better performance of Rajasthan Royals’ batsmen and bowlers, they will be the favorite in this match and will also be a strong contender to win the match. However, in this, the chasing team can get an advantage, because dew can also show its effect, in such a situation it will be difficult for the bowlers.

Read: Can any league be bigger than the IPL?

Q. What is our toss prediction of the Rajasthan Royals vs Royal Challengers Bangalore Match?