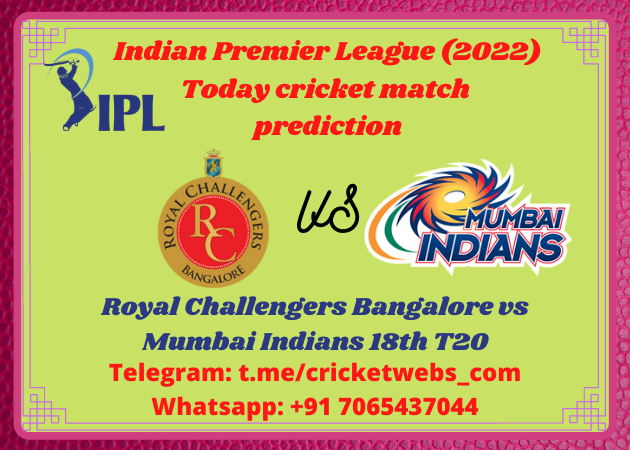 Who will win today in Royal Challengers Bangalore vs Mumbai Indians 18th T20 IPL 2022 match, let’s find out the match-winner? Today’s match prediction of RCB vs MI 18th T20 is given below. Royal Challengers Bangalore vs Mumbai Indians 18th T20 match of Indian Premier League 2022 is scheduled to be held on Saturday, 9th April 2022 at Maharashtra Cricket Association Stadium, Pune. Mumbai Indians are ranked ninth after losing three consecutive matches, while Bangalore are at the sixth place after winning two out of three matches. Cricketwebs provides 100% match prediction tips for every cricket match.

Bangalore’s journey in IPL 2022 so far has been mixed. Bangalore has played three matches, winning two matches. In the first match, Punjab Kings were defeated by five wickets, while the next two matches were won against Kolkata Knight Riders and Rajasthan Royals.

In the first match, Bangalore bowlers gave a lot of runs in their over, despite scoring 205 runs, they failed to defend the target. But taking lessons from the first match, RCB did well in the next two matches.

In the second match, KKR could only score 128 runs and in the third match, Lucknow Super Giants could score 169 runs in 20 overs. However, if the first match is left out, then in the remaining two matches, there was some flaw in the batting. But with the arrival of Glenn Maxwell, the team’s batting will be strengthened. Maxwell has finished his quarantine period, he will be seen playing in the next match.

Harshal Patel and Mohammad Siraj have been performing amazingly since last season. Apart from Hasaranga, the lack of another spinner can be filled by Glenn Maxwell. Sherfane Rutherford may have to give up his spot for Maxwell.

Read: What is best cricket betting or fantasy cricket?

Mumbai Indians is the most successful franchise of IPL, but this year the opposite is being seen. Mumbai have lost three of their first three matches. The lack of key players of the team Hardik Pandya, Krunal Pandya, Rahul Chahar, Trent Boult, and Quinton de Kock is clearly visible. In the first two matches, Surya Kumar Yadav was not part of the team, in the third match, he scored a half-century and strengthened the middle order of the team.

Delhi Capitals were defeated Mumbai by four wickets in the first match, Rajasthan Royals by 23 runs in the second match, and Kolkata Knight Riders by five wickets in the third match. Leaving the second match aside, in the remaining two matches, Mumbai had the upper hand in the match. Both the matches were in the hands of Mumbai, in the last over the match was snatched by the opposition team.

In the first match, Lalit Yadav played a good innings and in the third match, Pat Cummins scored 56 runs in 15 balls to make the match one-sided. Daniel Sams of Mumbai Indians gave 35 runs in his one over.

Read: How to do online cricket betting in India?

Who will win RCB vs MI 18th T20 Toss Prediction?

In the history of IPL, both the teams have played each other 31 times, in which Royal Challengers Bangalore have won 12 times and Mumbai Indians have won 19 times. The matches played between the two are always interesting and exciting. The same can be expected from this match as well.

Q. What is our toss prediction of the Royal Challengers Bangalore vs Mumbai Indians Match?