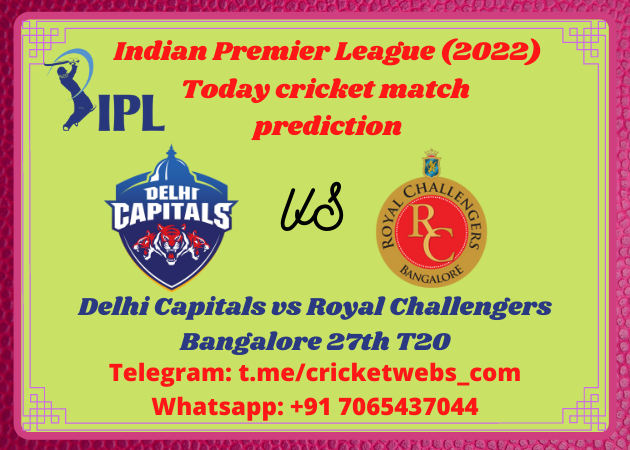 Performance of Delhi Capitals in IPL 2022:

Delhi Capitals have played a total of 4 matches this season in which they have won two matches. DC defeated Mumbai Indians in his first match and Kolkata Knight Riders in the fourth match. Apart from this, they have to face defeat against Gujarat and Lucknow.

Players like Prithvi Shaw, Axar Patel, and Lalit Yadav are performing very well in batting for Delhi. Apart from this, captain Rishabh Pant has also played good innings in some matches. Warner has played a total of two matches so far, in which he scored a half-century in the last match.

Mustafizur Rahman, Khaleel Ahmed, and Kuldeep Yadav have performed well in the bowling. Apart from this, Shardul Thakur and Axar Patel have also bowled well in different matches. However, Rovman Powell has been a consistent flop in both batting and bowling.

Royal Challengers Bangalore have played a total of 5 matches this season, in which they have won three matches. In the first match, RCB could not defend the score of 205 against Punjab Kings, while in the fifth match against Chennai Super Kings, they could score only 193 runs while chasing a target of 217. Apart from this, they have defeated Kolkata, Rajasthan, and Mumbai.

Royal Challengers Bangalore have performed well with different batsmen and bowlers in all matches. Captain Faf du Plessis is the highest run-scorer (146) for this team.

Dinesh Karthik is a game-changer batsman for the team and is batting brilliantly in every match. This season he has scored 131 runs at a strike rate of 218.33. He got out only once in 5 innings. Apart from this, he has also hit 9 sixes and 13 fours.

Sri Lankan spinner Wanindu Hasaranga has been consistently performing well in the bowling department and has also taken the most wickets for RCB this season. Apart from this, Harshal Patel, Mohammad Siraj, David Willey, and young bowler Akash Deep have also performed well in different matches.

IPL Records That Are Almost Impossible To Break

Who will win RCB vs DC 27th T20 Toss Prediction?

According to the performance, Royal Challengers Bangalore seems to be a strong contender to win this match. But seeing the way Delhi Capitals batted in the last match and defeated Kolkata Knight Riders, it can be guessed that they are back in form once again.

Apart from this, Royal Challengers Bangalore had to face defeat against Chennai in the last match. Although there was a poor performance by the bowlers in this match the batsmen batted well. After batting well in the first match, Faf du Plessis has been a flop in all the matches, so a lot depends on him.

Anyway, the team batting in the second innings at the Wankhede Stadium has more advantage. So a lot will depend on the toss as well. Whichever team wins the toss will decide to bowl first and the team batting first will want to score big against the opposition.

Can any league be bigger than the IPL?

DC vs RCB Head To Head Records in IPL:

Q. What is our toss prediction of the Royal Challengers Bangalore vs Delhi Capitals Match?