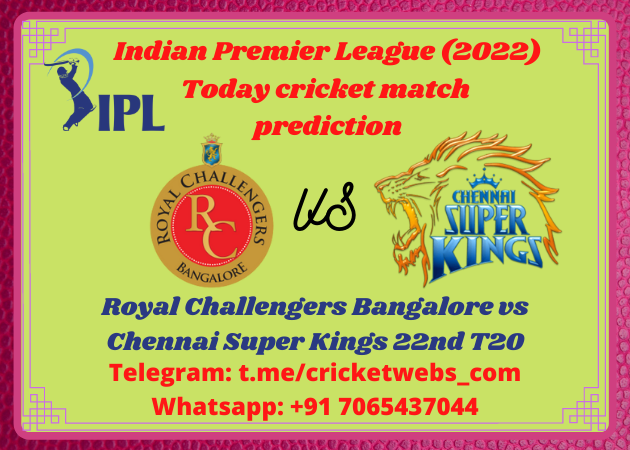 Chennai Super Kings, considered one of the strongest teams of IPL, has not won a single match in IPL 2022 so far. They have played a total of 4 matches so far this season, in which they have been defeated by Kolkata, Lucknow, Punjab, and Hyderabad respectively.

Chennai Super Kings’ batting has also been a flop this season, along with the bowling unit is also looking very weak and they lack bowlers who can bowl well in the death overs. Along with this, no bowler is able to perform well in the powerplay.

Dinesh Karthik has performed very well in all the matches for Royal Challengers Bangalore and he has not been dismissed once in 4 matches so far. In the match played against Rajasthan Royals, his team was in trouble, but as soon as he came, he started batting and gave RCB victory.

Who will win RCB vs CSK 22nd T20 Toss Prediction?

If we talk about the performance of both the teams this season, then Royal Challengers Bangalore is considered to be a strong contender to win this match. But Chennai Super Kings is a team that knows how to make a comeback and they have proved it time and again.

However, in the next match, Deepak Chahar can be seen playing, who is their main bowler in the powerplay and he also takes valuable wickets of the opposition team. Apart from this, last season’s Orange Cap holder Rituraj Gaikwad has not been able to perform well in any match so far but the captain and team management are showing full faith in him.

Although Bangalore may be a strong contender to win this match, Chennai Super Kings would like to forget their past performance and make a comeback in this match and would like to open their account this season by stopping Bangalore’s Vijay Rath in any case.

CSK vs RCB Head To Head Records and Past Performance:

Talking about the Head To Head Records of CSK and RCB, both the teams have faced each other 29 times in IPL, in which Chennai Super Kings have won 19 matches and Royal Challengers Bangalore in 9 matches. Apart from this, one match has been a no result. In IPL 2021, Chennai defeated Bangalore in both matches. Chennai Super Kings had to face defeat by 8 wickets against Sunrisers Hyderabad in their last match. While the Royal Challengers defeated Mumbai Indians by 7 wickets in their previous match at Bangalore.

Q. What is our toss prediction of the Royal Challengers Bangalore vs Chennai Super Kings Match?