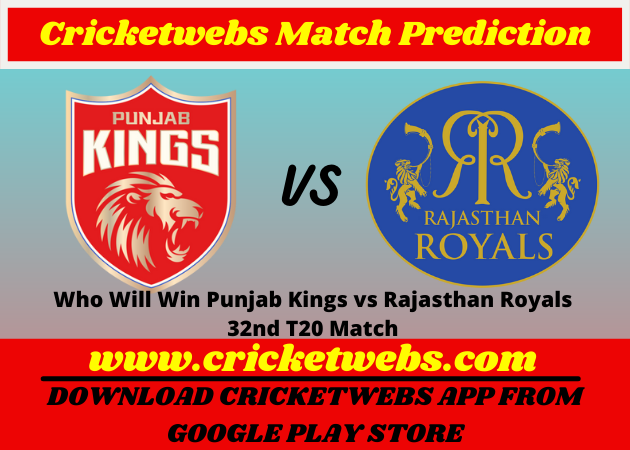 The 32nd match of IPL will be played between two neighboring states Punjab and Rajasthan. The matches played between the two are often exciting. This is their second match in IPL 2021. The first match was played at Wankhede Stadium. Punjab Kings won this match by four runs. It was a very exciting match.

Young batsman Sanju Samson, captaining for the first time in this match, won the toss and elected to bowl first. In this match, Punjab Kings captain KL Rahul scored a brilliant 91 off 50 balls, in which he hit seven fours and five sixes.

In the second innings, Rajasthan lost its first wicket in the very first over in the form of Ben Stokes. Manan Vohra also returned to the pavilion in the fourth over. Sanju Samson scored the most runs for Rajasthan.

He scored 119 runs in 63 balls. Which included 12 fours and seven sixes. At the other end, wickets continued to fall at frequent intervals. 13 runs were needed in the last over of the match. The ball was in the hands of young player Arshdeep Singh. Everyone felt that Rajasthan would chase the target of 221, but Arshdeep made a brilliant over and gave only eight runs. This match was very fun and exciting.

Who will win PBKS vs RR 32nd T20 Toss Prediction?

Punjab Kings are at 6th position in the points table. The PBKS has won only three matches in the eight matches played so far in IPL 2021, while losing five. To reach the playoffs, Punjab needs to win consecutive matches.

It is a bit difficult to make a balance in team combinations. Hopefully this year Punjab will do a little better.

Top Batsmen: KL Rahul. This year in IPL, KL Rahul is seen in tremendous form. So far, he has scored 331 runs in seven matches at an average of 66, hitting 27 fours and 16 sixes. His strike rate is more than 136. It is expected that the same form will be maintained in the future also.

Top Bowler: Ravi Bishnoi. Ravi Bishnoi is doing well for the team in his very first season. In the four matches played so far, he has bowled at an economy of only 6 runs. He has also taken four wickets, one can expect good bowling on UAE grounds.

The performance of the Rajasthan Royals this year has been mixed. Out of the seven matches played so far, three have been won and four have been lost. Rajasthan is at the fifth position in the points table.

Chetan Sakariya, Jaydev Unadkat, Kartik Tyagi, and Mustafizur Rahman have joined as fast bowlers. The responsibility of the spin department will be on the shoulders of KC Cariappa, Kuldip Yadav, Mayank Markande, and Shreyas Gopal.

Top Batsmen: Sanju Samson. This season of Sanju Samson has gone well so far. So far, he has scored 277 runs in seven matches with the help of a century and a half-century. He has hit 26 fours and 11 sixes. His strike rate of 145 is quite good.

Top Bowler: Mustafizur Rahman. Bangladeshi bowler Mustafizur Rahman is a strong link in Rajasthan’s bowling line-up. His performance this year has been very good, he just bowled well in the home series against New Zealand. So far in IPL 2021, eight wickets have been taken in seven matches.

Both the teams have equal ability, the batting order and bowling lineup of both the teams are the same. But still, Punjab Kings have a slight edge.

Even though there is a lot of grass on the pitch, the ball is not coming easily on the bat. The ball is two-paced, due to which the batsman is finding it difficult to play. Some ball is coming to a halt, then some ball is taking more bounce. The weather is hot. There is no chance of rain at all.

Ans. Punjab Kings will hit more sixes in this match.

Q. What is our toss prediction of the Punjab Kings vs Rajasthan Royals Match?