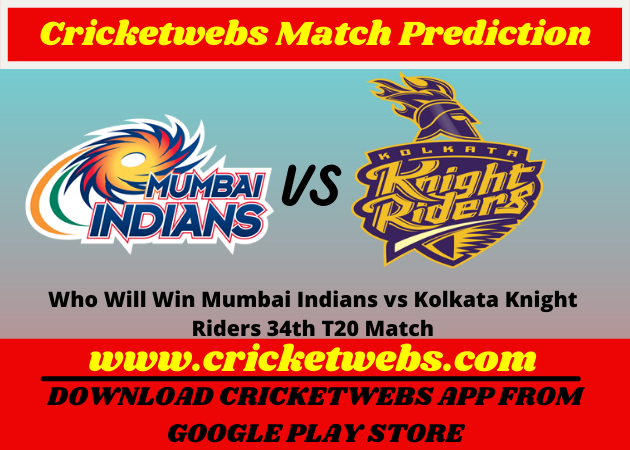 The 34th match of IPL will be played between Kolkata Knight Riders and Mumbai Indians. This is the second encounter between the two of the season. Mumbai Indians won the first match by 10 runs. This match was full of excitement and ups and downs. Such matches attract cricket lovers towards themselves.

Kolkata Knight Riders won the toss and elected to field in the previous match against Mumbai Indians. Batting first, Rohit Sharma’s 43 runs and Suryakumar Yadav’s 36-ball 56 runs helped Mumbai Indians to score 156 runs in 20 overs. This score was not very big on the pitch of MA Chidambaram Stadium, Chennai.

In the second innings, Nitish Rana and Shubman Gill got off to a great start, both sharing a 72-run partnership for the first wicket. Shubman Gill scored 33 runs in 24 balls and Nitish Rana scored 57 runs. He also hit 6 fours and two sixes in this innings. The match was going one sided in favor of Kolkata. It was being speculated that Kolkata would win in the 18th over.

To win, Kolkata needed 33 runs in the last 30 balls and had 6 wickets in hand. But in front of the brilliant bowling of Rahul Chahar, not one of the batsmen went ahead. Rahul took four wickets in the match. Apart from this, Trent Boult took two wickets. Mumbai Indians won this thrilling match by ten runs.

Who will win MI vs KKR 34th T20 Toss Prediction?

Mumbai Indians won’t be too worried about the defeat against Chennai Super Kings in the first match of the second phase of IPL 2021. They are currently at the fourth position on the points table. In eight matches, Mumbai has won four matches and lost as many times.

In the last match, in the absence of Rohit Sharma, Kieron Pollard took over as the caretaker captain. After winning the toss, MS Dhoni decided to bat first. Mumbai Indians took a strong hold in the match by dismissing three batsmen in the first three overs. Ambati Rayudu also retired hurt by the fourth over.

Dhoni also returned to the pavilion by getting out in the sixth over, CSK’s score was four for 24 in 6 overs and Ambati retired hurt as the fifth player. After that Ravindra Jadeja and Rituraj Gaekwad took the team’s score to a respectable total of 156 runs in 20 overs.

Trent Boult, Jasprit Bumrah and Adam Milne got two wickets each. While chasing the target, Mumbai had lost half of their team till the score of 87. Saurabh Tiwary scored the most runs for Mumbai. He scored 50 runs in 40 balls. Mumbai lost this match by a margin of 20 runs.

Top Batsmen: Quinton de Kock. Quinton de Kock has been in great form this year. First performed well in Test and T20 matches in West Indies. Then he was selected as the Player of the series in the T20 series against Sri Lanka. The opening pair of him and Rohit Sharma is amazing.

Top Bowler: Rahul Chahar. Rahul Chahar is at fifth position in IPL 2021 with 11 wickets in eight matches. For the last three seasons, he contributes significantly to the victory of the Mumbai Indians. In the last match too, he had conceded only 22 runs in four overs. He could be the trump card of Mumbai Indians in the UAE.

This win has brought him to the sixth position, their net run rate has also improved. Till now Kolkata have played eight matches in IPL 2021 and have won three matches, they have 6 points now. Further matches will also have to be won to make it to the playoffs.

In the previous match against Royal Challengers Bangalore, Captain Virat Kohli won the toss and decided to bat first. In the second over of the match, Prasidh Krishna got Virat Kohli out LBW. After that Srikar Bharat and Devdutt Paddikal took the score forward. By the eighth over, RCB’s score was 51 runs for the loss of two wickets.

Andre Russell took three wickets for only nine runs in the spell of three overs. He dismissed AB de Villiers for zero on the very first ball. Apart from these, Lockie Ferguson also took two wickets.

KKR successfully chased down the target of 92 runs for the loss of one wicket in ten overs. Shubman Gill scored 48 runs in 34 balls and Venkatesh Iyer scored 41 runs in 27 balls

Top Batsmen: Shubman Gill. Shubman Gill’s performance has been very good since his selection in the Indian team. His way of playing has improved more than before. In the last match against Bangalore, he scored 48 runs in 34 balls in which he hit 6 fours and a six.

Top Bowler: Varun Chakaravarthy. Varun Chakravarthy performed brilliantly in the first match for which he also got the Man Of The Match award. He gave only 13 runs in his four overs and took three wickets. Hope the performance will be the same in the coming matches as well.

Mumbai Indians is the first choice of our experts in this match, they have more effective players who have the power to win the match. The results of the last few matches are also in favor of Mumbai.

The pitch in Abu Dhabi is currently helping the batting, as the pitch will slow down as the IPL progresses. Smaller scores will also start getting defended. Dew is visible in the second innings of the night match, due to which it is better to bat later.

Ans. Mumbai Indians will hit more sixes in this match.

Q. What is our toss prediction of Mumbai Indians vs Kolkata Knight Riders Match?