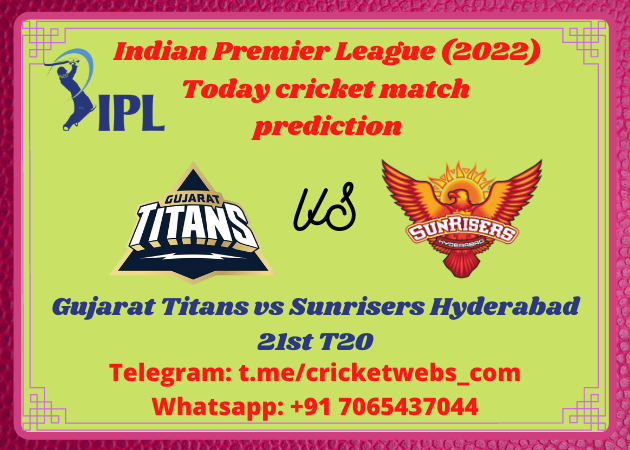 Who will win today in Gujarat Titans vs Sunrisers Hyderabad 21st T20 IPL 2022 match, let’s find out the match-winner? Today’s match prediction of GT vs SRH 21st T20 is given below. The 21st match of IPL 2022 will be played between Sunrisers Hyderabad and Gujarat Titans at Wankhede Stadium in Mumbai from 7:30 pm. Talking about the position of both the teams in the table, Gujarat is at the second position and Hyderabad is at the 8th position. Cricketwebs provides 100% match prediction tips for every cricket match.

Performance of Gujarat Titans in IPL 2022:

Gujarat Titans is the only team this IPL season who have won all their matches. This team has defeated Lucknow in the first match, Delhi in the second match, and Punjab in the third match.

In the match played against Punjab Kings at the Brabourne Stadium, Rahul Tewatia gave his team victory by hitting a six in the last two balls of the 20th over.

Gujarat Titans are looking very strong in both the batting and bowling department. Opener Shubman Gill has been in fine form, while Rahul Tewatia has batted tremendously in two matches to help his team win the match in the final overs.

Talking about the bowlers, Mohammed Shami, Lockie Ferguson, and Rashid Khan are in good form. However, the performance of opener Matthew Wade is very worrying for Gujarat.

Sunrisers Hyderabad did very poorly in the first two matches of this season, but in their third match against Chennai Super Kings, they bowled and batted well and this led to the team’s first win.

In the third match, T. Natarajan and Washington Sundar made a spectacular comeback and took 2-2 wickets. Also, Bhuvneshwar Kumar’s performance is average. However, Marco Yansin and Umran Malik can play the role of game-changers in the bowling department for the team.

Hyderabad’s team is looking good both batting and bowling, but due to top order flop, they had to face defeat in both the previous matches. Apart from this, some bowlers are proving to be expensive in every match.

Who will win GT vs SRH 21st T20 Toss Prediction?

If we look at the past performances of both the teams, Gujarat Titans looks to be in a very strong position as they have not lost any match so far. In the match played against Punjab Kings, he got victory due to the sixes in the last 2 balls.

Many players in the Gujarat team are proving to be game-changers. Rahul Tewatia and Hardik Pandya have the ability to change the course of the match at any time. Apart from this, there is absolutely no dearth of experience in the bowling department as well.

Apart from this, looking at the situation in Hyderabad, they also have a good mix of experience and young players, but due to the poor performance of many bowlers in the top order and the same match, the team lost the first two matches.

The match against Gujarat Titans is going to be a tough one for Hyderabad as they beat the in-form Chennai Super Kings in the last match, while Gujarat is in seventh heaven after winning the previous match.

Past performances of Gujarat Titans and Sunrisers Hyderabad:

Gujarat Titans defeated Punjab Kings in a thrilling encounter in the previous match, while Sunrisers returned to the tournament by defeating Chennai Super Kings by 8 wickets in Hyderabad. Both the teams are going to face each other for the first time in IPL history, so this match is very important for them.

Q. What is our toss prediction of the Gujarat Titans vs Sunrisers Hyderabad Match?