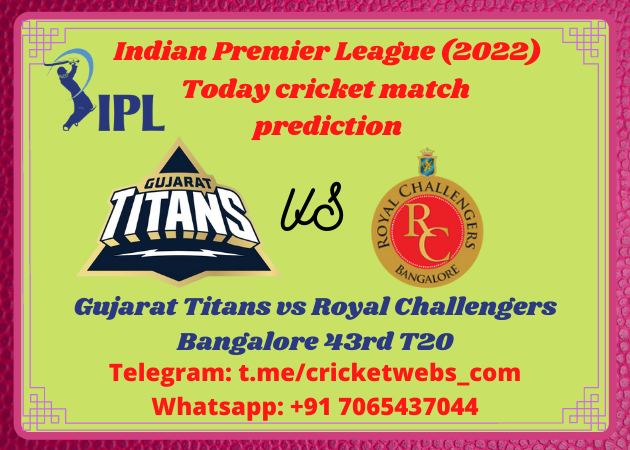 Performance of Gujarat Titans in IPL 2022:

The performance of Gujarat Titans in IPL 2022 has been the best as they have lost just one match in 8 matches. Their team has won many matches on the last ball of the last over. Rahul Tewatia against Punjab Kings and Rashid Khan against Sunrisers Hyderabad, hitting 2 sixes in the last 2 balls to give victory to his team.

Apart from this, the batting of captain Hardik Pandya also looked very good, although he was soon out in the last match. Wriddhiman Saha also batted at a very good strike rate against Sunrisers Hyderabad.

Talking about the bowling department, Mohammed Shami, Rashid Khan, and Loki Ferguson have been bowling well in almost all the matches. Although Alzarri Joseph and Yash Dayal are also doing well. The team also has Hardik Pandya and Rahul Tewatia as bowling options.

Royal Challengers Bangalore have performed well this season but their batting has completely flopped since the last two matches. Although many of his players have flopped continuously even before this, but in different matches, batsmen like Dinesh Karthik, Shahbaz Ahmed, and Faf du Plessis have won their teams by batting well.

Dinesh Karthik has led RCB to victory in many matches by batting well, while former captain Virat Kohli has been running flop this season and he has not been able to score a single half-century so far. Kohli has scored 128 runs in 9 matches this season at a strike rate of 16.0 and 119.63.

Glenn Maxwell is a game-changer in the middle order for Bangalore but after batting well in 1-2 matches, he has consistently flopped in the last two matches. In the last match, RCB could not chase down the target of 145 against Rajasthan Royals and were dismissed for just 115.

The bowling department has excellent bowlers like Josh Hazlewood, Mohammad Siraj, Harshal Patel, and Wanindu Hasaranga. All of them are bowling well in almost all the matches. In the last match too, the bowlers bowled very well against the Rajasthan Royals.

Who will win GT vs RCB 43rd T20 Toss Prediction?

If you look at the performance of Gujarat Titans and Royal Challengers Bangalore this season, then Gujarat is performing much better than them. Gujarat has looked to be on the verge of losing in the last over in many matches this season, but batsmen like Rahul Tewatia and Rashid Khan have given their team victory with their batsmen.

Also, Royal Challengers Bangalore’s batting looks to be a complete flop and it is in even worse shape from the last two matches. However, his performance in terms of bowling has not been so bad. If RCB wants to win this match then they have to bat well. Nevertheless, according to the performance, Gujarat Titans seems to be a strong contender to win this match.

Gujarat Titans defeated Sunrisers Hyderabad by 5 wickets in their last match. In this match, Rashid Khan gave his team victory by hitting 3 sixes in the last 4 balls. Apart from this, Royal Challengers Bangalore had to face defeat by 29 runs against Rajasthan Royals. They were unsuccessful in chasing the target of 145.

Q. What is our toss prediction of the Gujarat Titans vs Royal Challengers Bangalore Match?