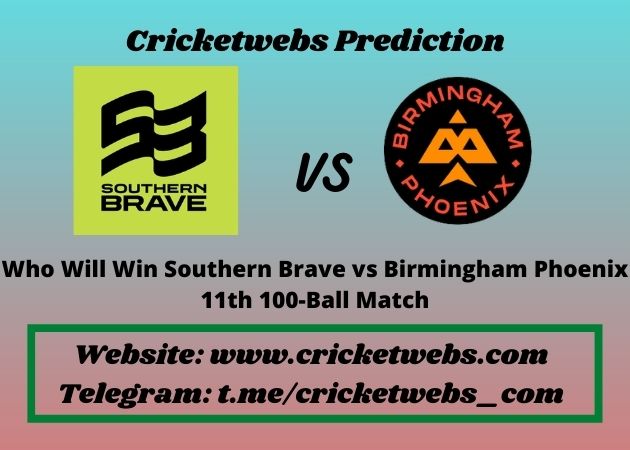 Birmingham Phoenix has played two matches in the Hundred League, winning the first match by three wickets and losing the second match by 6 wickets. They are at fifth place on the points table.

In the last match, they played against Manchester Original. After winning the toss, Captain Moeen Ali decided to bat first. Birmingham’s innings was all-out to 87 runs, they could not even play a hundred balls of their account. Three of their players were out on zero. Moeen Ali scored the most runs in the innings, he played an innings of 15 runs.

Southern Brave has played two matches so far. They lost the first match by nine wickets against Trent Rockets and in the second match, they were defeated by Welsh Fire by 18 runs. They are currently at eighth place.

In the second match, Southern Brave won the toss and decided to field. Batting first, Welsh Fire scored 165 runs. Jonny Bairstow scored 72 runs 39 Ball for his side. In which he hit five fours and as many sixes.

Chasing the target, Southern Brave could only score 147 runs, James Vince scored 40 runs for the team.

Top Batsmen: Liam Livingstone. Although Livingstone may not have scored many runs in two matches of this league, he is not far from a big inning. This year has been great for him. He scored a lot of runs in the England-Pakistan series.

Top Bowler: Imran Tahir. Imran Tahir is the best leg spinner of South Africa, he has troubled many players with his googly. He is a match-winning player.

Top Batsmen: James Vince. James Vince is England’s best batsman, he has been in form for some time now. In the last match, he scored 40 runs for which 27 balls were played. His strike rate was 148. He hit four fours and a six.

Top Bowler: Chris Jordon. Chris Jordan is a famous T20 bowler, he has participated in many leagues of the world. His death bowling prevents the opposition team from scoring runs. In the last match, he conceded only 22 runs in 20 balls.

There is a batting track, the boundary dimension is small. Strong winds help in hitting big shots. What more does a T20 batsman need. This ground is known for big scores. The pitch will help the batting. It is a good deal to bat after winning the toss.

Join Us On Telegram Channel: CRICKETWEBS.COM

Ans. Today’s 11th 100-ball match will be played in The Rose Bowl, Southampton.

Q. Where can I watch The Hundred 2021 live or stream the match?

Q. What is our toss prediction of the Birmingham Phoenix vs Southern Brave Match?